The Salvation Army, an international movement, is an evangelical part of the universal Christian Church. Its message is based on the Bible. Its ministry is motivated by the love of God. Its mission is to preach the gospel of Jesus Christ and to meet human needs in His name without discrimination.

The Salvation Army is the second most recognized charitable organization. We are the second largest charity in the United States and one of the most trusted in the world. We have the knowledge and ability to withstand the constantly changing social needs and current events facing our communities.

The Salvation Army has a presence in every zip code across Western Pennsylvania. 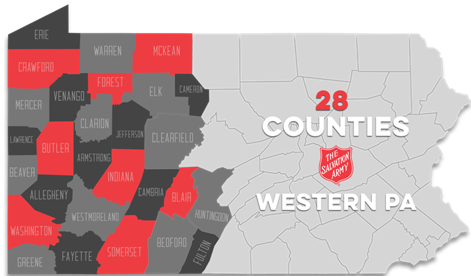 The Salvation Army Organization and Structure

National Doughnut Day was first celebrated in Chicago in 1938 to help the needy during the Great Depression and commemorate the work of the “doughnut lassies” who served soldiers during World War I. Today, the first Friday in June each year marks an important date in American food history and raises awareness for the critical services that The Salvation Army provides to those in need each day.

In order to raise needed funds during the Great Depression The Salvation Army began honoring 250 World War I volunteers and lassies, on the first “National Doughnut Day” in 1938. Among those honored were Ensign Margaret Sheldon and Adjutant Helen Purviance who came up with the idea of frying doughnuts in soldiers’ helmets near the front lines as a quick treat. The doughnuts became an instant hit that was brought back to America by returning “doughboys.”

National Salvation Army Week, typically observed in the second week of May, was first declared by President Dwight D. Eisenhower in 1954. In the proclamation, Eisenhower noted: "Among Americans, The Salvation Army has long been a symbol of wholehearted dedication to the cause of human brotherhood. Their work has been a constant reminder to us all that each of us is neighbor and kin to all Americans, giving freely of themselves, the men and women of The Salvation Army have won the respect of us all."

In 2001, President George W. Bush issued a new proclamation recognizing the week, stating: “During this week, I encourage Americans to express their appreciation for the Salvation Army's good works and to follow their example of serving a cause greater than themselves.”

Today, Salvation Army service units, along with volunteers, businesses and government, celebrate National Salvation Army Week through a variety of special events and activities across the country.